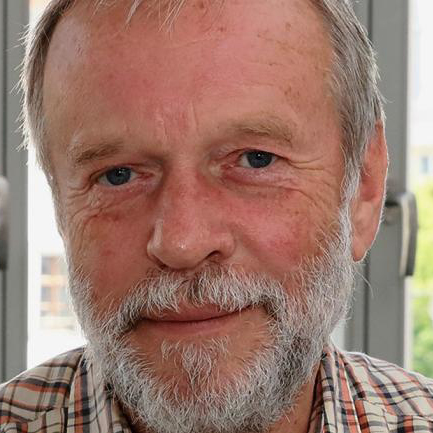 Utz Rachowski, born 1954 in Saxony (East-Germany). He was a former political prisoner in East Germany and was sentenced to 27 months jail because five own poems. After prison expatriation and release through Amnesty International to West Germany. Study of art history and philosophy in West Berlin. Since then, freelance writer of prose, poetry, and radio plays. Since 2003 part-time rehabilitation advising to victims of the GDR dictatorship under the auspices of the Saxony State Commission for the Stasi Files. Readings and lectures throughout Germany, the U.S.A., Sweden, Denmark, Spain, Finland, Senegal, Kenya, Lithuania, and Poland. Works translated into English, Polish, French, Spanish, Serbian, and Finnish. He published 17 books with stories, essays and poetry. 2007 Reiner Kunze-Prize, 2008 Hermann-Hesse-Grant. 2013 in the US nomination for a Pushcart Prize. 2014 Nikolaus-Lenau-Prize. 2017 he received the Prose-Prize of the Society for Contemporary American Literature in German (SCALG) and 2021 the Lisa-and-Robert-Kahn-Poetryprize.

You can find the Slavic heart in the grass
of the vast
meadows of my home land. It is the poppies
among the flowers,
their fruit pleasantly intoxicating.

The summer has to be warm and yellow. As
a child you have to
lie in August’s first hay.
Then when you have lived patiently and
alone, some day
it speaks from your mouth.

It is the storm above the winds, the
ruby among
the hearts of stone. Its pulse is the light
that it
captures and releases again in
the sunset,
but full of blood.

The blood of the Slavic heart has within it the
deeper insights
of the ailing Europe with its exiled
inhabitants:
man and woman.

The Slavic heart is
the tear in people’s laughter
with which they say farewell to laughter until
the last
farewell.

The Slavic heart is the drop of
Vermouth at the spring
of love, the scratch on the shining
sword of death,
the hawthorn in the eye of cowardice, the rust
on the pillars
of the world.

You gain the Slavic heart if
first you
pound your chest and then your forehead.

Then it is up to you to find
the Slavic heart.

Hamlet is writing a letter

Tomorrow at 8:05 you fly
from Klotzsche to Sharm el-Sheikh
life runs in the blood who consumes it shall perish
wrote Moses in his third book your war inside me
writes Hamlet this very night

“Doubt thou the stars are fire
Doubt that the sun doth move”
the bookseller says next morning:
last night they were moving troops out
those were cargo planes overhead

“Doubt truth to be a liar
But never doubt I love”
writes Hamlet non-stop
tomorrow at 8:05 you fly
from Klotzsche to Sharm el-Sheikh

my words your hand will comprehend them
tomorrow you fly out of Klotzsche
the 8:05 to Sharm el-Sheikh
writes Hamlet on this night

In the East the snow of last year
is falling again but you
want the warm places
in this world I know
tomorrow at 8:05 you fly
from Klotzsche to Sharm el-Sheikh
and to a nunnery go if there is also war
in Klotzsche I loved you not
writes Hamlet another perhaps
a goddess from the Red Sea in other time
but inside me the sun shines no more
in the Vogtland the stars no longer shone
the thorns we held up to our people are ashes

I now fear only for myself
writes Hamlet and someone like you
may have nothing to fear but I
must fear both – in your eyes I saw the green ships
sailing languidly up to Arcadia unhurried
I wrote you
the war passing over my head your war inside me
tomorrow from Klotzsche
to Sharm el-Sheikh you fly
at 8:05
from the one into the other
writes Hamlet in his final letter

THE COLD WAR IS LONG SINCE OVER

My heart was already a bullet
of ice and I set off again
for Checkpoint Charlie
where every day the Russians stand
with matryoshkas babushkas
and wrist watches
because their time has run out
I asked right away for Makarov
and lowered my eyes and looked
at that single strip of bronze
where once the wall had stood embarrassed
the Russian said konyezhno sure!
you can have for eight hundred
now I looked at the sky above the
old guard tower and thought of you
on the beach at Sharm el-Sheikh
embracing someone else
the Russian asked me and how many rounds
that’d be another ten apiece
or you can make me an offer
I looked at him and said – just one
and sensed the wall rising again
the Russian said I can’t do that
and looked at the sky with me
as if the answer were there
he gave me then for half the price
an old pocket watch with a cover and
the three Fates on it he called after me
and don’t come back let them decide
the age of suicidal heroes is past
and why not just get a divorce!

I walked back to the strip of bronze
for the wall, yelled no! you got it wrong
what you learned at your stupid school
don’t shoot! were the last words they spoke
they weren’t after heroism just love!
like you and me the Russian rolled his eyes
said it doesn’t prove anything Yesenin too
was stingy with his noose a real farmer
what’s this about love who still believes that
at most just you and me as if I could
smell it you all just want a single round
and the babushkas just stay there on the
table nested together perplexed and cute
come on now I said – you babushka!
pulled the Russian by his fur coat
this one’s on me just a few steps away
said we’ll get a stiff drink with
Makarov’s price so off to the Café Adler
with all those pitiful people!
we got pretty loud sang to each other
“Ah, let the flying cranes bear all their grief away”
and “Speak now, comrade Mauser!” and once more
“Have no regrets and suffer pain no more!”
on every chair was sitting the New Man
not man nor woman not warm not cold
this is his high calling – he has rid the world of love
looked all around stared at us but made no sound
– we punched in all his many faces!

Let these screwballs have it! the Russian yelled to me
screwing briefly reminded me of you
pulled out my pocket watch made the three Fates
jump that seemed to calm even the Russian
we headed home under peaceful skies
sang that we’d conquer Baikal sailing just a walnut shell
it was already late in the day as you sank
under that very same sky exhausted
from the arms of the other one
down on the beach at Sharm el-Sheikh
the war was long since past it seemed to us
me and the Russian who’d refused me the pistol
rescued! my heart beat fast now quick to the subway
no sooner said than it was done – we jumped the turnstile!
I had more beer in the fridge and empty returnable
bottles the Russian sang there in my kitchen
of pitch-black ravens and cranes snowy white ones
we had no regrets and I suffered pain no more
I waited another winter for you