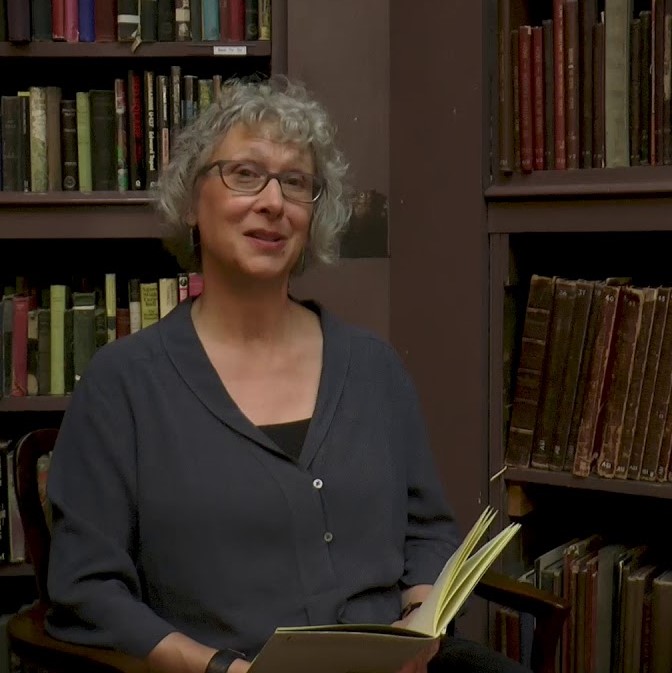 Lydia was born in New York and has lived in Yorkshire for over 40 years. She graduated from the Tyler School of Art at Temple University, Philadelphia, with a BFA in printmaking in 1976. A former music publisher, she holds a patent for the invention of a braille music transcription system. Lydia has attended a number of Arvon courses, and for three years she attended Antony Dunn’s seminars with The Poetry School in Leeds. She will complete the MA in Writing Poetry at Newcastle University in 2019. In 2011, Lydia collaborated with composer Steven Jackson on Out of Memory, a love song about an obsolete computer premiered at the Leeds Lieder Composers + Poets Showcase and later performed at the 2012 University of Leeds Contemporary Music Festival. Lydia won the 2017 Flambard Poetry Prize and her poems have appeared in a range of literary magazines. She was shortlisted for the 2018 Bridport Prize and commended for the 2014 Hippocrates Prize. Her poems have also appeared in Any Change? Poetry in a Hostile Environment (ed. Ian Duhig, 2018) and The Hippocrates Prize Winning and Commended Poems (Hippocrates Press, 2014).

I am a furnace in the snow.
I have been given my anger-stick
and told to go plant it
where and when my flames
have turned to embers

You wrestle me from sleep
the first night we share a bed,
an arm flung across my chest
and a sudden grasp that makes me drop
my dream and gasp in terror.

You wake when I call your name,
say Sorry, it’s something I do.
I was saving you from falling off a cliff.
Heart still thudding, I think
Well, this is new.

The second night I sleep through
and turn to the happy surprise of you
beside me when the hum of morning
traffic wakes us and a distant siren
and the neighbours stirring, too.

You walked in your sleep last night
you tell me. Really? I don’t remember.
Well, you say, you wouldn’t, would you?
I’m stunned. What did I do?
Odd this was something you knew

and I didn’t. You opened and shut the door,
you crouched on the floor, drew a circle
with your fingertip, then turned to me and said
‘I will never leave you, never.’ I look
at the door, at the floor, at you. Not a clue.

In this arm-in-arm promenade
we tell the town and each other
and ourselves that there is no greater joy.

You would walk to the Ends of the Earth
for me and I am Walking on Air but this
is all hyperbole and we are far too wise
to make those old mistakes.

(These three poems first appeared in A History of Walking, published by HappenStance Press in 2019.)

Lydia Kennaway’s pamphlet, A History of Walking, was published by HappenStance in April 2019 and reprinted in November 2019. She earned an MA in Writing Poetry from Newcastle University in 2019. Lydia was the winner of the 2017 Flambard Poetry Prize, and in 2019 and 2020 she was awarded Creative Retreats in Aldeburgh by Britten Pears Arts. Lydia also took part in the LD50 project in 2019, a bilingual literary exchange celebrating the twinning of the cities of Leeds and Dortmund. Lydia’s work has appeared in ten anthologies including Any Change? Poetry in a Hostile Environment, edited by Ian Duhig, and in magazines including The Rialto, Raceme, Strix and Poetry & Audience.

Some readings by Lydia Kennaway of her poems can be found on Soundcloud at https://soundcloud.com/lydiakennaway/sets/a-history-of-walking