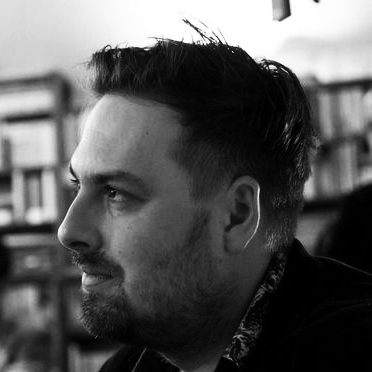 Adam Borzič (born in 1978 in Prague) is a poet, mental health therapist , translator as well as editor-in-chief of the prominent literary bi-weekly Tvar. He is the author of five poetry collections. In 2014 he was nominated for the Magnesia Litera literary award. His poems have been translated into Polish, English, Romanian, Croatian, Serbian, Russian, Slovenian and Portuguese.

Since Berlin you want to write a poem so simple,
That you repeat for a hundred times words like banality, presence, black currant…
You read your notes in your mobile; its display is somewhat scarred,
Which now seems to me fitting. You read in them you cannot turn back time. There is nowhere to return it. So the sadness of the past is forever only an echo,
Falling through a large sieve like a noodle, while the ladle still hangs
On the wall, and the sky is grey and the stairs look they lead to hell,
But they don‘t. So you open the door, the defeat of the meaning disappears,
Only a chest with tulips on top remain.

You thought of poetic scenes,
And they are your new nightmares, your love poems
For more and more men and one woman, topical only for the polyamory,
But you won’t confess it publicly, so you suffer from nightmares,
That fall on the professor’s bald head
Several days after his radio programme was cancelled,
Which is also your fault, and on top of that, he has to introduce you. .
Through a strange eye of a while, climbs an insect’s futility and all that love
It feels to be threatened with the polite interest
Of the audience, say in Berlin…

The wind of nervousness is luckily asleep. It’s November.
Berlin kept October to itself together with the beautiful Tereza
And beautiful Jan, together with the beautiful black man at the reception,
Who, aged fifty, married a Czech man who hates his countrymen.
Now at last November. A month of simplicity. As well as a month of joy.
Far behind are left poetic scenes, orphaned like a lighthouse on an island
In the middle of the North Sea. The chairs are empty, tables by the wall,
Toilets sparkle with cleanliness. Standstill.
So you are happy about a repaired tap in the kitchen,
Several outstanding poems I have read today,
Interviews with Olga and Ivan. And naturally,
walking. Sometimes modest, other times self-confident,
ever so often meek like wrinkles on Ivan’s face,
ever so often magical like the night full of yellow tobacco leaves
on the pavement, and nautical apples,
which you stole in your dream.
And then you laughed about it.

Who created the beauty
of the dancing wall?/ The dense and bright stars
caught in the cobwebs of spiders’ silk,
the moments of loneliness transformed
into the shining fingers that caress yarn
of the lit up river /Get down to your work,
the white horses encourage you,
their mane harvested the winter
and they hurt the silence
above the basket full of golden apples.

*
Not even the red traffic light,
so round in the late night
with the colour in the shade of coal gas,
and in it, the silhouettes merge
with the depth of the shadow, –
won’t stop the motion, be it
a noble gesture
the flowers in the clouds / Yes,
I head down the water of the dream to the lands
of the desert birds whose cries
calls in the march of the days.

*
On the borders of the city vase,
she finishes singing the tunes of the night / Sleepy,
you fill her with milk
until her breastfeeding body blinds
the columns in the courtyard. / Unlocking
just one strike of a match for
the light
and the hours will be like running sand,
ripples of magic will flood the air
and a bitch will run from the night
and jumps with the hand of the glow
through the woven brambles.