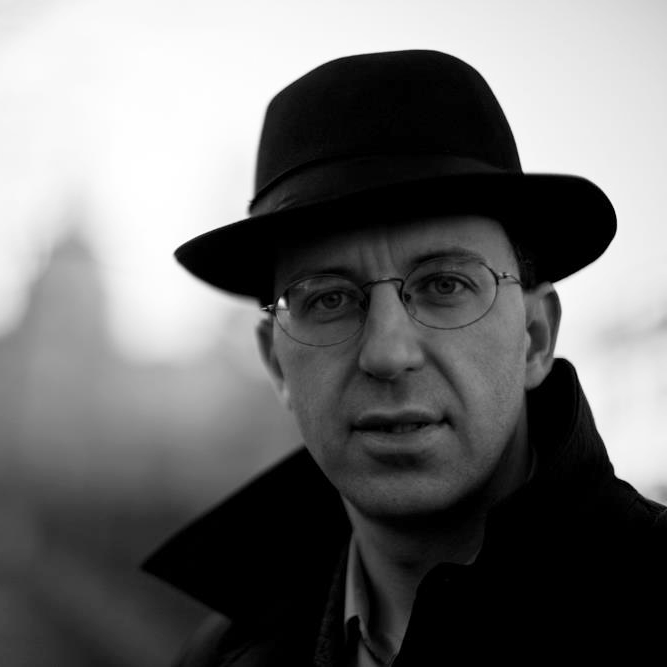 to falsify the pace, to falter –
in the empty trams this day continues no more
and the people along the embankment are tinged by a strange premonition
the morning is getting ever more complex
and the news increasingly befogged:
water being flushed, shelves slid shut, incessant rush up and down the escalators
rustle in the office buildings
whispers in the mezzanines and connecting corridors

catching oneself again belonging nowhere
the tram out in the industrial wastelands slowly admits darkness and rawness
and footnote comments appear more distant in the pathetic awkwardness of someone’s
demonstrations –
we’re all criminals, or at least some of us
trespassing, peculiar looks aside
disagreement hanging upon lips
alighting at the Kablo Station
with farina of snow “assailing” the nape
waiting for another connection and then one more
the next bus finally arrives
circling round the peripheries of Lidls and Kauflands weary ah Weary
darkness behind their eyes’ cemeteries
descent alongside huge buildings of embezzlement
down the tunnels of disappearing quarters
with the loud laughter of passengers boarding the bus at further stops
to build the memory of places in foreign exiles
to traverse the crossroads of looks from twenty years ago to try to hold onto something
before it dissolves again in the greyish giggling glooms

to submerge!
for the while, and noiselessly
the already extended coherence
to refuse them afterward with a certain amount of nobility
to never want
dreams tampered with
in some zone of “despite”
in the gradually permeating ghettoes
in possession of their own logic, of a possible sanctification
to catch a fleeting spleen
the faces of others always smiling only a few minutes after the fact
to keep erring, someone always wanting to straighten our values and set our order for us
giggling throughout
the way we’ve grown accustomed to
somewhere, somehow accustomed to
that no! that it’s this way and it’s peace and quiet we want most of all
trams from the Krymská station drive off again
people have already greeted the midnight
but still it’s as if they wanted nowhere to go
that other city’s already asleep in its stressful mood
behind the house and apartment flats an occasional cry breaks out
or not, keeping silent!

the day again reeks rather disgustingly
more defeats, today however ordered so that you’re not even angry
getting closer and closer to your wobbly hour
of unintentional ruination

so that afterward it’s the ever same old
but so far it’s longing and smiling
you especially find untrustworthy
in the balmy morning hours of a foreign city –
a continually repeated wrestle
with the clock, with escaping
the derogatory company of men of the world and somehow managerised folks
toying with punk, which doesn’t hurt
toying with punk, which fits, which has to, as part of something:

somewhere later in a deserted bar between the dead-end canals someone pulls out an old record of
Bill Haley’s
it’s not, dunno –
together we peer into the countryside darkness of a sleepy periphery beyond the city’s all thinkable
peripheries
trying to forget about something
whilst making our way from the sink and the storage onto the yard with the earth-closet
sometimes we yearn for complete pretermission
on the way to the tram stop Between the Islands

and all the other words
blending in my ears at the Schilling pre-midnight bar
on the main road of a dark quarter
the purplish lights of peep shows, cabarets and so-called contact centres
with the white female silhouette against a red background –

people shrinking back in the twilight of lounge chairs
slow movements, voice inviting to the first local Lesetheater
some lounge chairs emptied
others, behind a partition, feebly fuming
having no other different words any more
after the news you can do nothing about
having been caught utterly unprepared
aber – slightly defiant
endlich –the lips resigning

intractable words, repeated over and over
a little corner at the boat’s bar
there is nowhere to sail off
not even inside you
with all the barricades – on and on churning something
going out – somewhere to the upper deck
and watch the last ray of the fading day
with a certain trace of additional hope and hope-lessness
and then you really abandon the boat
the reverberating sound of lock chambers
what with what and against what
and what in unclear circumstances
and what completely explicitly, what acutely
unbidden questions when sinking
perhaps not, the other un-said negatives!