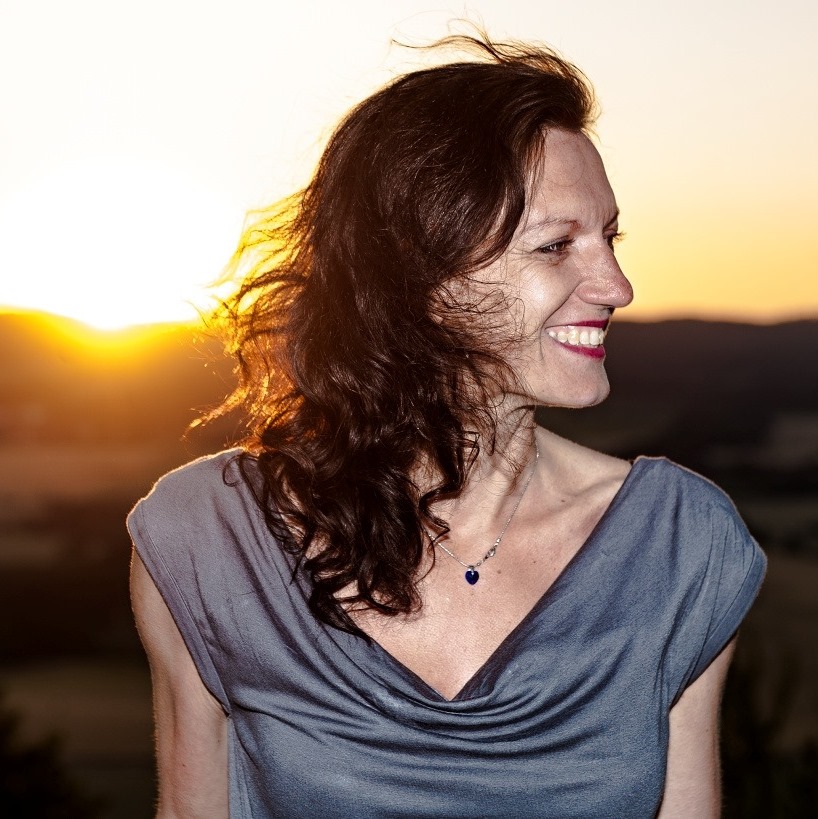 Olga Stehlíková is a Czech poet, a Czech studies expert and literary critic and journalist. Her debut poetry collection Týdny (2014: Dauphin, Praha) won her prestigious Magnesia Litera Award in 2014. She is also a celebrated author for children (Kluci netančej, Kařut a Řabach). Her poems have been translated into many languages, most recently into English for the prestigious periodical Modern Poetry in Translation.

Still emitting the fumes,
These are the moments when I realise
My finality,
When at long last,
I know what to do with my hands

I call you to call me,
In the empty car, I utter aloud
Your name, sound after sound,
But you don’t call or answer,
Because you are driving,
In the flowing traffic,
Your gear has been in five for a while
And you have no reason to lower it.

These are the moments I can see
Inside the surrounding vehicles –
They are so near,
The lesser and the great Ploughs,
The little and the big girls in it,
Little stars for indicators,
Extra delicate angry moves.

The Czechs don’t know the art of merging,
Even though it is so simple.

These are the moments of subtractions,
When time becomes relative,
When unexpectedly, in unfamiliar diversions
Memories emerge,
Like seals by the holes in ice,
When I remind myself,
I ought to go and see the grave,
That your path is smooth,
That I managed only a little,
That I haven’t had my supper.

I spend my time in the traffic jam.

Children in the backseats shout at life,
They are at the age when life still listens
To their screams. Google responds to
My key word.
Securely fastened seatbelts,
Anatomically shaped seats amongst breadcrumbs,
This is the best place for them,
One day they may scream their way out of them, perhaps they already sit in their own urine.
The steering wheel skin is so humanlike,
I check myself in the rear mirror:
A seventeen-year old, wild, seat-belted
Old lady with a license,
A favourite mug and full tank.

No, we won’t make it today.
I have only one time, which
Makes it a rare commodity, uncountable.
I devote my time, I give it
Away in tiny, neat parcels,
It is an invisible charitable act,
Which I am going to deduct.
My photo is in all my documents.

Look, the box here under the dashboard
Is deep. Like Grand Canyon.
What you put in nobody will ever see.
Once I entrusted myself to the headed, embossed paper.
The jam is in the intestines of a withheld argument.
I will never get rid of metaphors.
Hold onto the gear!

From the tailback in the next lane
A man in the city jeep gazes at me,
Perhaps my lights are not on, or
I am bad at pulling away, I am sloppy with my clutch

Look at all the control lights,
So much I have to watch,
To make sure the kids grow up and no one badmouth them

No, we won’t make it today,
My sweet ones,
I purr like an engine.
The crash barrier lures you more than an Oreo tartlet,
Blacker than tarmac.
Not far behind them
A strange city, in which we live,
From which we try to climb up
In the dangerous, small, mobile,
Carefully serviced homes.
Not far behind them wild shrubs
With the young ones, who are soon going to fly out
Across six lanes of the motorway, succeeding for the first time.

Composed from the reports of The Institute for the Study of Totalitarian Regimes in Prague, quotations used from the placards and banners at  Majáles 1965, a traditional student parade since the 19th century in celebration of love, and from Ginsberg’s poem King of May (the original uses translation by Jiří Josek), diaries of Pavel Juráček and Jan Zábrana as well as Andrew Lasse’s interview with Allen Ginsberg and his memories of the visit to Prague. This text was created on comission.

a pak vyhoštěni do svých bytů

a tak to vidíme i my:

a tak se to ví

The Right of the First Night

Our desire for free-thinking exuberance

is fettered and theatrical otherwise

our desire for self-indulgent freedom

yet you have to hand it to us:    we are good at moaning

in order to touch our intimate parts with displays

our revolution is dangerous

It is the year sixty five, February, the eighteenth

The American Allen arrives from Cuba

having been deported from Prague, where he was not heading

crippled by Wi-Fi et via câble of information

from which there is no escape

and then deported to our own flats

the Jew and gay arrives in Prague in his sneakers, friends

while his friend Škvorecký is on the phone

whereas his friend Zábrana is on the phone

So his transit flight becomes his stay at the hotel Ambassador

Luckily the times are documented by the machines of secret agents

So it is known

How much Allen drinks and how dirty he is

How unlikeable he is

Everything is before the subsequent shredding and religious worship

And that is how we see it too:

as Vladimíra Čerepková in Viola Club gets bewitched

as Václav Havel in Viola Club is disgusted

as a week later after he puts the heating on
at home, Václav Hrabě suffocates

carbon monoxide travels through the streets

It is 30th April, nineteen sixty-five

Allen, in Prague for the second time,

on the same day he is added to the list by J. E. Hoover

America is full of dangerous individuals

who must be followed

So behaved, so good, our Majales is secured
Long live Gizberg, Gizberg our role model!

who changed her mind about her candidacy

and also for our Škvorecký, our Josef Škvorecký

who is down with the flu

All our slogans have been approved beforehand

We agree with everything

Allen wears a black, shiny crown on his head

so it is known

Ginsberg is the King of May,

An expression of proletarian internationalism

… nobody expected such crowds

Before the students’ masquerade

the dancing American who arrived from Moscow, Warsaw and Krakow

from which he has not been deported

to land in Prague, from which he is going to be deported

he does not understand much
what it even is, this approved protest

Allen ends up in the sobering cell,

being taken by the car patrol of the Public Security:
“After the arrival of the patrol, Ginsberg made his escape and had to be pursued.”

a technical act E4 – the bugged conversations in the Hotel Merkur.

“I have been told that the indisputable privilege of the King of May is to sleep with anyone of his choice in Prague.”

One who is not with us, has a heart attack

the Viola Club is filled to the brim

Bring back the Right of the First Night, Primae Noctis

the informer Mirek is busy

– so the secret police holds in their hands a full notebook

the list of Prague lovers is managed by the records registry

42 lovers are squashed on top of each other, they are hot

In the registry and in the report

Bravo, bravo, will it be printed by Rudé právo?

and I am the King of May, and in a few minutes I will land at London
Airport

It is 24 hours after deportation from Czechoslovakia

and I am the King of May, in a giant jetplane touching Albion’s airfield
trembling in fear

Allen belongs to London
together with Dylan, Marianne Faithful and all the Beatles of the world

They talk about William Blake

It is better to have an idiotic regime than to think

in Prague who came across Ginsberg

Mladá fronta prints about the broom shaft in the arse

because that’s what the diary said

among the untouched, Czech, non-Jewish youths

A considerable absenteeism from classes, lack of interest about family affairs, he does not admit where he has been, his mental state is decidedly disturbed… If at home, he writes into the late hours without displaying signs of tiredness, which is conspicuous.”

The Experts’ Reports of the Regional National Health Office

Summary states that Allen’s influence on an individual

“A damaging influence of poet Allen Ginsberg, who suffers from drug addiction and homosexuality, has had an impact on the practice of paediatric psychiatry.”

In a letter to the Minister of Interior of socialistic Czechoslovakia, Lubomír Štrougal,

The new President Havel invites Zappa, Dalai Lama and Ginsberg to the Castle

Prague celebrates the beatniks with a festival

We celebrate Ginsberg with poems in Berlin